M. Night Shyamalan is one of the most divisive filmmakers in the world. Yeah, I said the world, not just the United States. That’s how divisive he is.  He burst onto the Hollywood scene in 1999 with The Sixth Sense. The movie was a gigantic hit and became a permanent part of american movie pop culture.

He followed that movie up with two more decent hits, Unbreakable and Signs. After that he made a movie that wasn’t that well received and then it all went to shit for Shyamalan. First the critics turned on him, then the audiences abandoned his films. He became toxic in the film industry. He was the punchline of many jokes. After a couple of high priced flops, it looked like Shyamalan would be run out of Hollywood.

Well, he’s back. Sort of. He has a new movie out called The Visit. No studio would be crazy enough to hand him a big budget again and the movie was made for just 5 million. Compare that to The Sixth Sense, which cost 40 million sixteen years ago. Like most of Shyamalan’s other movies, The Visit is a horror movie, with a twist. No, the twist isn’t some surprise ending. The twist is that the movie is also funny. Shyamalan went from being a joke to writing jokes. If no one else was going to take him seriously then why would he take himself so seriously.

Early indications are that this new format works for him. At currently 63% on rottentomatoes, this is Shyamalan’s best reviewed movie in a long time. Has he figured out how to make good movies again or was he just lucky this time? Were his previous movies as bad as everyone made them out to be? 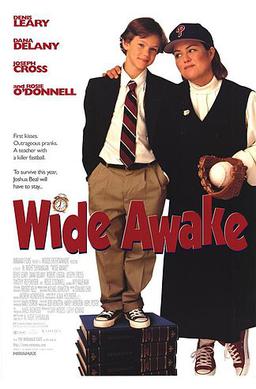 The Sixth Sense wasn’t Shyamalan’s first movie. He actually wrote and directed a movie called Wide Awake that came out in 1998. Was it a spooky movie where at the end the main character realizes they were asleep the whole time and in fact not Wide Awake. No, not even close. It was a family comedy about a kid looking for God in the world. It also featured Rosie O’Donnell  as a “baseball-loving nun”. That’s from the movie’s wikipedia page.

I’ve never seen this movie, or heard of it, but now I want to. Why didn’t they show this piece of shit on ABC Family or some other cable channel when I was younger? I don’t even remember seeing this on the shelves at Blockbuster. The poster has Rosie O’Donnell in a nun outfit, wearing a Phillies hat, and holding a baseball glove (because she loves baseball, remember). There’s no way I wouldn’t have rented that. Did M. Night Shyamalan see the success of the Sister Act franchise and figure America must love seeing lesbians as nuns? Did this start out as his spec script for Sister Act 3?  Denis Leary gets top billing for the movie but he’s not even in the wikipedia description.

You shouldn’t be surprised that Shyamalan made The Visit funny. He’s done comedy before. We also shouldn’t have been surprised when he started to make shitty movies because he had experiencing doing that before too.

It couldn’t have gotten better for him after that movie though. First came The Sixth Sense. If you were too young to remember, it really was a big deal. It started the whole “no spoilers” rule that exists today for movies and TV shows. You didn’t want the surprise ending ruined for you before you saw it. If you were waiting for it to come out on video you had to hope you wouldn’t accidentally hear about the ending. And back then you had to wait for like three years for it to come to Blockbuster. It sucked.

After The Sixth Sense, Shyamalan gave us the much anticipated Unbreakable. People smarter and cooler than you or I will tell you they thought it was better than The Sixth Sense. The critics didn’t agree. Neither did the audiences but it was still considered a hit for Shyamalan.

After a year off, Shyamalan came back strong with Signs. The alien movie starring Mel Gibson and Joaquin Phoenix made tons of money and Shyamalan was back on top. This seemed to be a more ambitious project for him. The movie didn’t rely on a single big twist. Rather, there were numerous instances of foreshadowing, callbacks, slow reveals, tension building, and humor. The movie had some legitimately scary moments but it was about more than that. To thirteen year old me, this was one of the best pieces of film-making I had ever seen. Shyamalan was a genius.

The movie was called Signs because there were crop signs, but no it was actually called Signs because it was really about all the Signs that God shows and Mel Gibson was a priest who stopped believing and his son had asthma and the alien tried to poison him but the asthma prevented it and his wife’s dying words all made sense to him now and Joaquin Phoenix used them to beat up the alien with a baseball bat. Oh my God. It all made sense, it all came together.

Signs is not as well thought of as it was when it first came out. Many people lump it in with Shyamalan’s shitty movies. When it came out, everyone ignored the strong religious message about faith and God and that stuff. Then Mel Gibson went fucking crazy and forever tainted the movie. And then Shyamalan made nothing but crap and forced everyone to reevaluate his earlier films. People started to poke holes in its logic and make fun of some of its cheesier moments. It’s not nearly as bad as some people make it out to be. I still think it’s a good movie, it’s just not as good as when I first saw it.

Signs was the beginning of the end for Shyamalan though. In the second part next week, I’ll cover Shyamalan’s fall from grace.